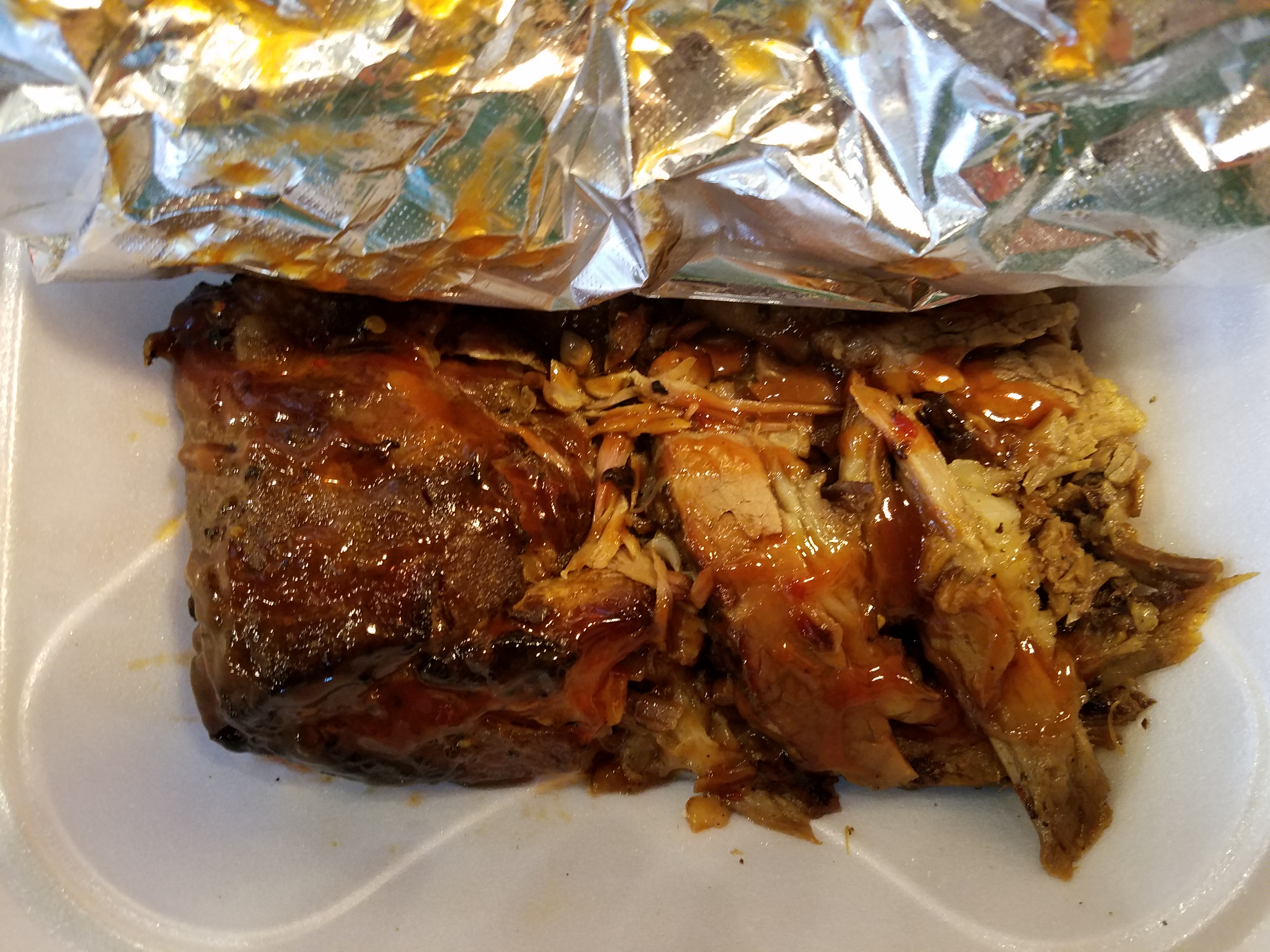 This was my first time to eat at Bobbee O’s BBQ. I was inspired to go after seeing tweet listing top BBQ in Charlotte, and it was listed 3rd, meaning it must be that person’s third favorite. Since I’ve already been to the other two listed, I decided to add this one to my list. I should eat every location in my home town at least, once shouldn’t I?

So Becky and I head up to Bobbee O’s, which is about a 20-25 minute trip for us. This was a Saturday evening, arriving around 8PM I figured they’d be packed; they were not. There was only one person inside.

Once inside we see that you order at the checkout counter. We take a menu and look it over to decide what we will have. About this time, I notice they have some deserts in a display case. But missing is banana pudding. Now for me, this is a yellow flag. I have always said, I maintain; all proper barbecue joints offer banana pudding.

Becky decides that she’ll get pork – which happens to be chopped pork – and her sides are slaw and sweet potato fries. Great, I don’t have to order chopped pork, I’ll get some of hers! That’s the way I like it!

I order Brisket and ribs; this allows me to knock out 3 of the main meats I always like to try. Missing was sausage. My sides were baked beans, mac and cheese.

As we go over to get our drinks filled I hear blues playing; ok that helps with the atmosphere. But this lack of banana pudding is worrying me a bit.

We sit down, I see no sauces on the table? Finally, our food is brought to us, in Styrofoam to go boxes. This isn’t a problem for me as I’ve had similar service in many BBQ joints.

I open the box up, and I see my two sides in to go containers, two slices of bread and some sauce in containers. Peel back the foil to reveal my meats. 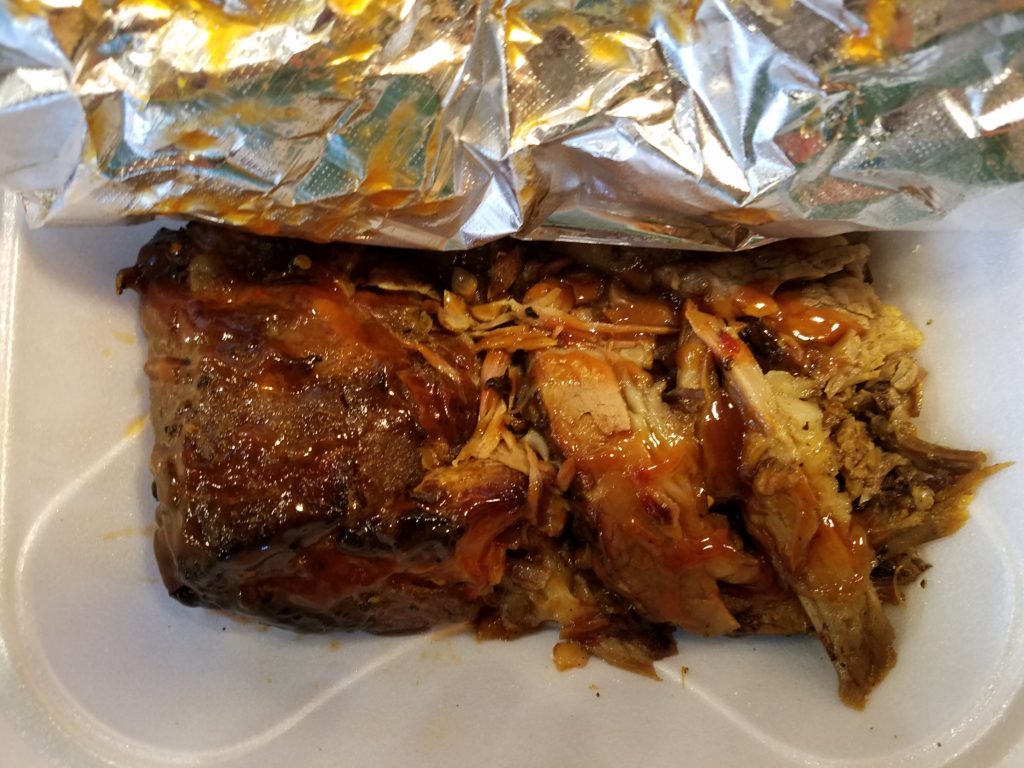 I’m disappointed to see that the brisket is somewhat chopped – not fine – and it is covered in sauce. The brisket was overcooked, perhaps the result of arriving at 8PM, but the place advertises open until 11PM. It wasn’t horrible, I’d say average. Putting some more sauce on it made it better, but now I’m liking sauce and not brisket.

Verdict: I’ll not order brisket next time I come here.

It’s ok that the ribs had sauce on them. I eat them wet and dry. And sometimes put sauce on dry rub ribs. But, they were also overcooked; and dry. The meat was too chewy.

Verdict: I’ll not order the ribs next time I come here 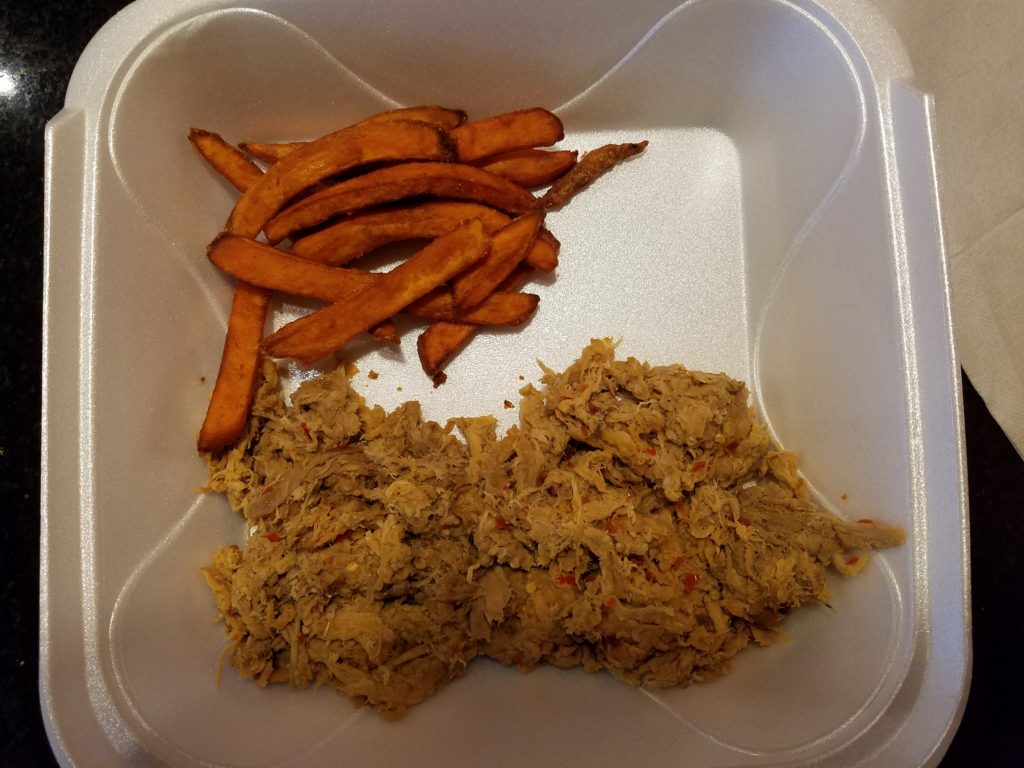 OK, this turns out to be the best of the three meats. The flavor reminded us of the pork that Byrum General store in Shopton – in Steele Creek – used to serve before they shut down. We liked Bryum’s and we liked this. This probably makes a great BBQ Sandwich! Although I’m not a fan of putting sticky type sauce on pork, their sauce was decent with the pork. I

Verdict: I’ll order this next time I come here.

The sauce is a thin red sauce that looks like a thin jelly when you first look at it. It is sweet, and not really hot. They say a little sweet and a little hot. probably a little less hot.

Sorry I didn’t take pictures of the sides.

The best of the sides was the Mac and Cheese, it was a little bit salty but had great flavor and loaded with cheese.

The baked bean just really didn’t stand out. They were good, but were like heavily buttered pork and beans without the pork. Dropping some of the brisket and chopped pork in the beans made them much better.

The Sweet Potato Fries were, about what you’d expect

The slaw, we have is a mixed verdict on it. Becky liked it; I thought it had a fish flavor to it. Which if you aren’t expecting it…

Bobbee O’s is place I’d go to if I were local to the area and didn’t want to drive far for BBQ.  Understand that I’ve eaten at many places that I’ll never go back to, under any circumstances.