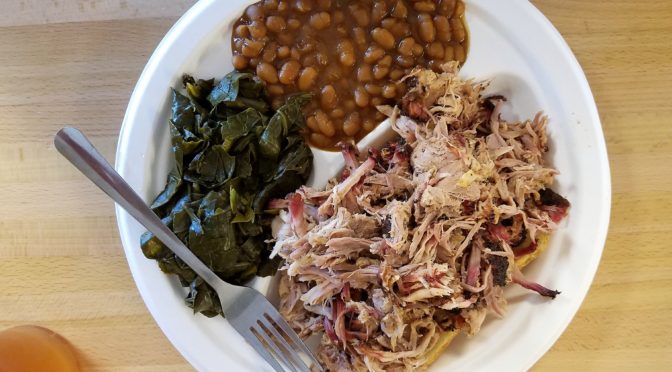 Ok this is one of my favorites for BBQ in Knoxville, TN. It doesn’t look like much…

I notice a great location across the road and up just a short piece.

This is not an easy place to spot and it is part of what might have been an old Motel? Anyway… location has nothing to do with what they offer up as barbecue.

I’ve eaten at Archers BBQ many times. many times, and I’ve had almost all of their meats on one visit or another. But on this visit, was just pulled pork. What I didn’t get this time was banana pudding. Most times I’m too late. As I was entering the place a family was leaving with the last of the banana pudding.

The Collard Greens – I f you haven’t noticed by now, I like greens. Well I like them when they are done right. As a kid I couldn’t stand them, but now I really like them. Archers has some pretty good greens.

I was in Knoxville teaching a Programmable Logic Controller – PLC – software class. One of the students had gone in to the same Archers a little earlier. I told everyone in the class where to go for barbecue and this was one of them. He too likes greens; but he was disappointed with them not having vinegar. I told him that what I do is use the moonshine vinegar sauce that Archers has. He frowned but said next time he’d give it a try.

Barron’s BBQ Beans – Yes, another favorite of mine is BBQ or Baked beans. And these are very good. However, like most places I add some of the pork to it. I typically always get this and vary my other side

The Pulled Pork – Yes it’s pulled and it is smoked! And very important to me, it comes less sauce served over Texas toast. Some people don’t want sauce; while others may want a different style sauce. Now they have multiple sauces but I used the Moonshine Vinegar sauce; I always get a vinegar sauce for pulled pork if it is available. I prefer that vinegar sauce to have a little more kick of pepper in it than this has, but it’s pretty good. It’s close to a Piedmont North Carolina Style sauce. I LIKE this sauce.

Folks if you liked pulled pork -I certainly do -, the you’ll like this stuff. Probably some of the best stuff in Knoxville.