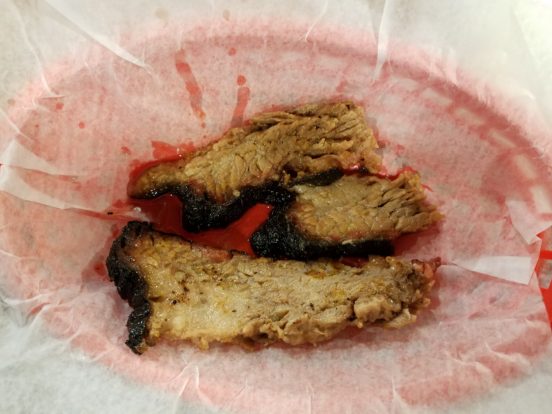 I’ve been eating BBQ for all my life, and I mean lots of it. This is the first review I’ve posted on WeKnowBBQ.com.

Wednesday was a busy day for me with CarolinaVarsity.com stuff. In the morning I was at West Mecklenburg High School for a 4-team 7-on-7; and then in the afternoon I made a drive up to Mooresville, NC to meet with Head Football coach Marty Paxton and see some 7-on-7 action with Mooresville and East Lincoln.

As I was leaving it was mentioned to me that there is a new BBQ place in Mooresville that must try. People that know me, know I like BBQ. I checked back at home to see if it was OK if stopped in and got some BBQ. With the green light given I threw Big Tiny’s BBQ and followed the directions and a few minutes later I had arrived.

At this point I’m going to add that normally I was to get BBQ in Mooresville, it would be at Lancasters. I’ll get around to a review of that place later.

So this is supposed to be “Texas Style”, folks don’t get hung up on style please. BBQ is done a bit differently across this country. Try it all. We might have favorite styles, but I’ve learned there are a lot of good styles. But when it comes to Texas, I always think beef BBQ. The best brisket you can get is in Texas junk. The best brisket is in Madison, AL; and it’s “Texas Style” too… but that’s another review. When it comes to BBQ, the differences are typically the type meat that is use, the woods that are used for smoking and lastly a sauce that you might use.

Enough on that, let’s get to Big Tiny’sBBQ

I want to say that I’ve been working to lose weight and have lost ~25lbs since I first started, ~20 since I got serious. This makes it hard on me to continue my life style of eating BBQ all the time. But when I go to a new place that I might not get back to for some time, I like to sample stuff. But I DON’T need all the meat, and certainly don’t need what they offer as samples. Those two, three or multiple meat offerings are typically two, three or multiple full servings!

So here is what I ordered:

Pulled Pork 4oz, I think they gave me more

Regular Sausage ditto on the 4oz

Banana Pudding – I was told it is the best ever, the kid didn’t know I’m also banana pudding guy, I make it, and I eat it everywhere I can find it. –

Let me get one item out of the way, the Potato Salad. It was average run of the mill already prepared Potato Salad. Wouldn’t you know, my luck has me picking the only side that I was told they didn’t make in house. I was really hoping for some good baked beans loaded with pieces of meats – hint, hint -. Don’t get me wrong, if you like Potato Salad this is good. Just nothing special. 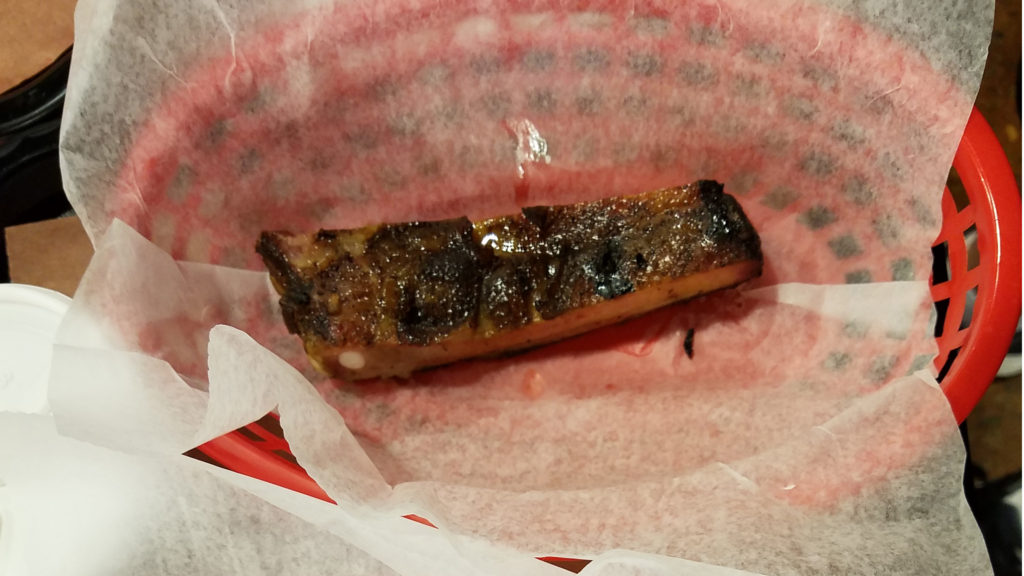 It was very good especially having it at 8PM. They close at 8:30, 8PM is end of the day, ribs have probably been sitting for a while warming and drying. It still retained some juices in it! Also, it was not over-cooked! Beware, you’ll hear me say often that you do NOT want “fall of the bone” ribs. You want ribs that you can easily pull off the bone with your teeth but still have a bit of firmness to them. Note, I did not say toughness!

I prefer baby back ribs however, spare ribs done right are good and, these were done right. I sampled both  of the thick sauces with the ribs; their original and the sweet and spicy. I preferred the sweet and spicy. A tip for you, don’t overwhelm your rib with sauce. drizzle some on to complement the meat. If you want to eat sauce then just buy some sauce and eat that. 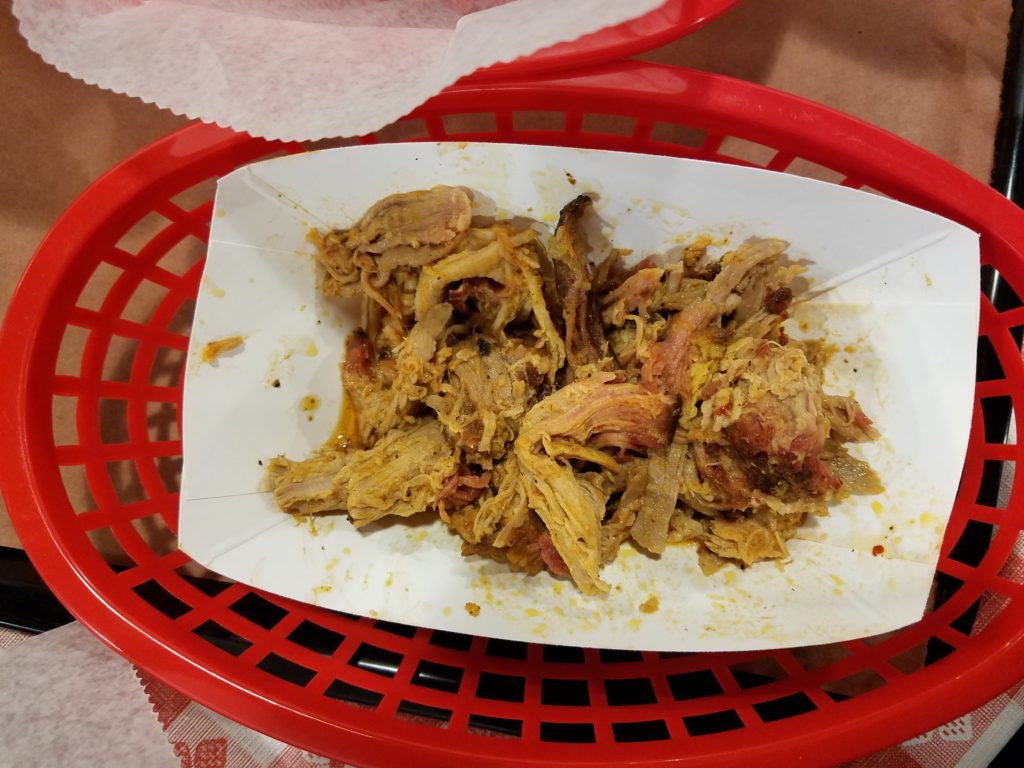 I had so much pulled pork, I had to take some home. It was a good “leftover” and even better with MY North Carolina “Red Sauce”.

Verdict:  This is a must try! Very good pork for “Texas Style” lol. 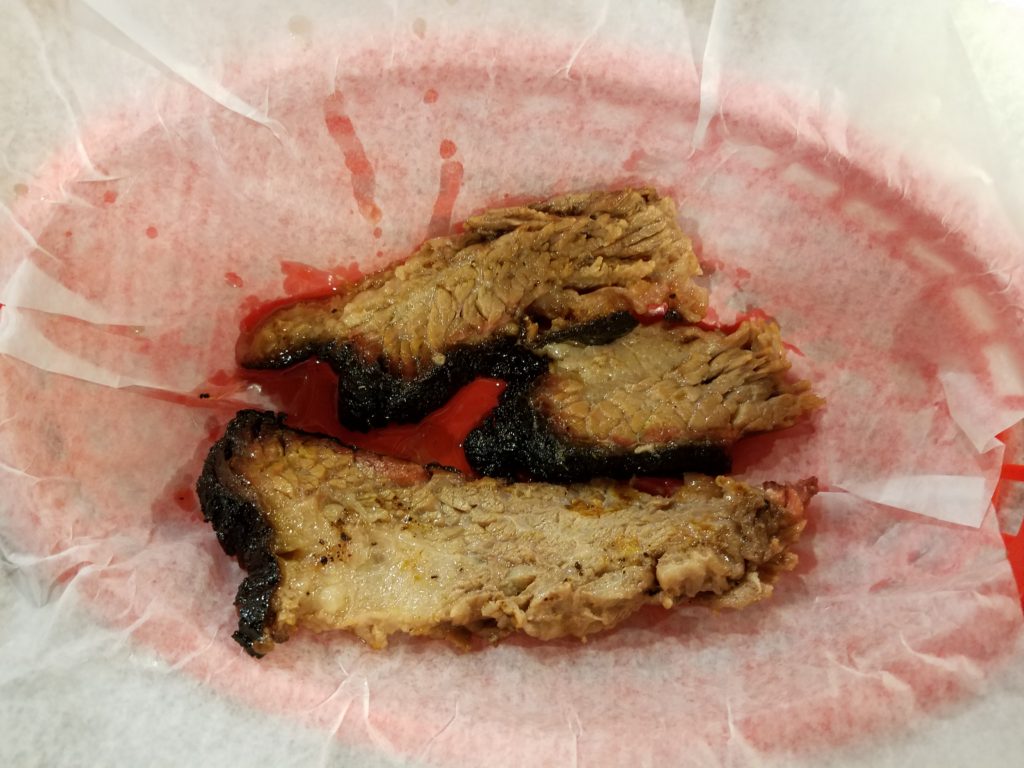 I just realized that I stuck this in the middle of the review; it should have been first or last, please forgive me. Brisket, this always seems to be the hit or miss item in a barbecue house when you can find it. Those that do brisket right, you’ve got a great tasty piece of meat. Done wrong, you might as well have made Sunday beef stew with it.

I liked every point that you would judge brisket. The meat was tender, it was still moist at 8PM, It had a good hit of smoke, there was still fat there and lastly, we had that nice burnt outer, giving us the awesomeness similar to what is known as a burnt end. I tried both the Original Sauce and the Sweet and Spicy; the Sweet and Spicy wins for me.

Like the pork, there was too much meat considering all the other food. So some of it went home. At home I did not have a thick sauce, so I tried it with my North Carolina “Red Sauce” WOW is what I say. I didn’t expect brisket to taste that good with it. So, you might try a little of their North Carolina “Red Sauce” on the brisket; just a little, this might not be for you. 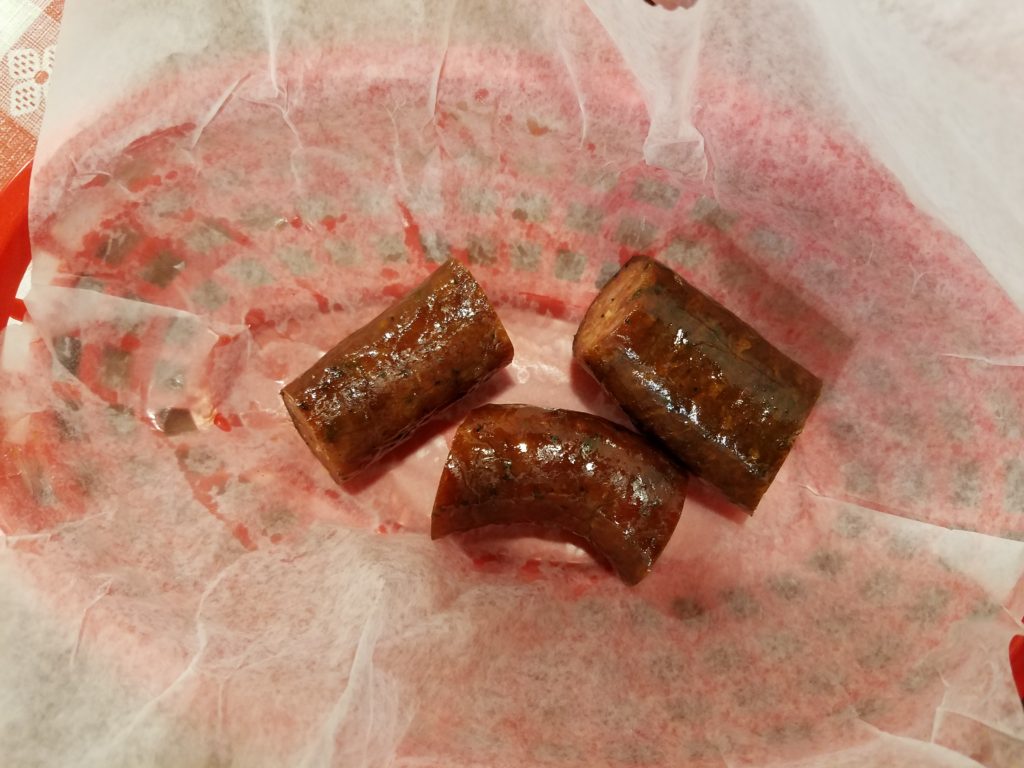 You need to know, I love sausages. And it is very difficult to find in BBQ joints, especially in North Carolina. I order both of their sausages, the jalapeno sausage had more flavor making it the winner of the two. However, it was a bit on the dry side. But still worthwhile, just not the winner I think it could have been based on the other meats. Perhaps this was impacted by the time of day. Or maybe this is what I should have expected?

Note, it wasn’t very spicy. So don’t be alarmed by the Jalapeno part…

Verdict: if you like sausage, yes try it. While it didn’t get hit out of the park like the ribs, pulled pork and brisket did; it’s still nice. 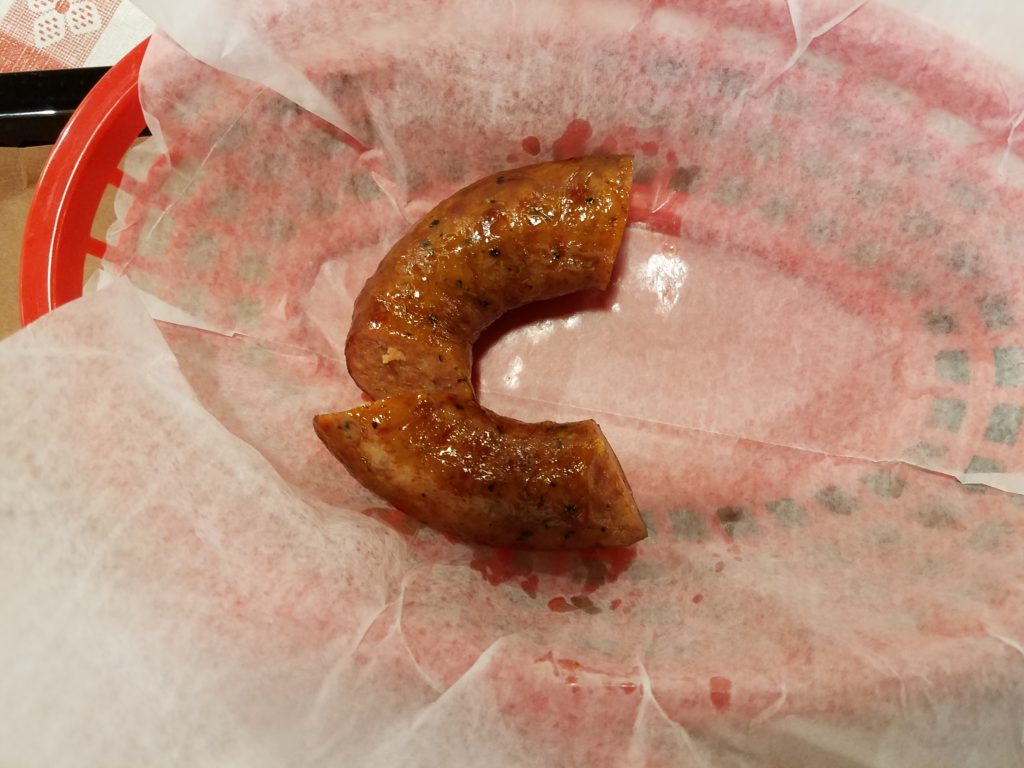 This was nice and moist, however, on the flavor side it was a bit flat. Based on how well they did the other meats, I think they can do better here. But I don’t know if they make the sausage or buy it and just smoke it.

Verdict: Since it’s hard to find sausage, if you don’t want the “heat” of the jalapeno, give this a shot. It was however the least of my favorites of the five meats. 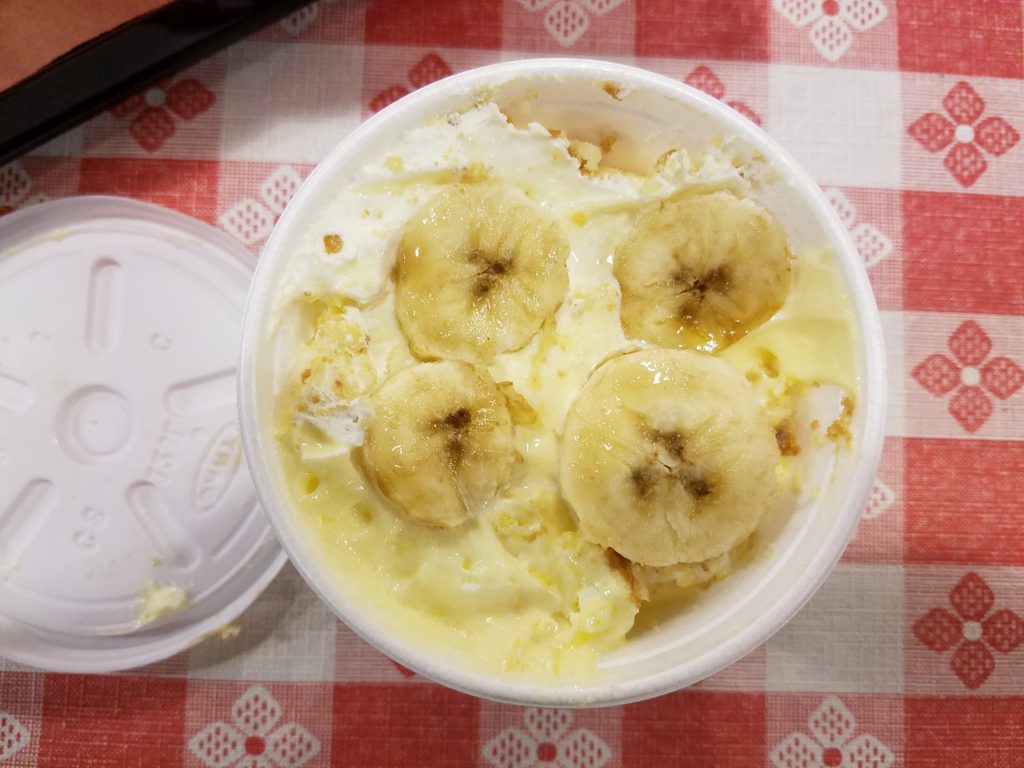 OK first it isn’t “homemade pudding”. Is that bad? No, it isn’t a bad thing. Most places that you get banana pudding it isn’t all made from scratch. I don’t know their process to what they’ve made, but they are winners here. It’s thicker, most likely from adding some heavy cream or heavy whipping cream.

It’s not the best banana pudding I’ve had in a restaurant. But it is one of the better that I’ve had. It might rank top-10 out of hundreds of different puddings.

It’s great to know that there is another option in Mooresville for good BBQ, and in many ways a better option.