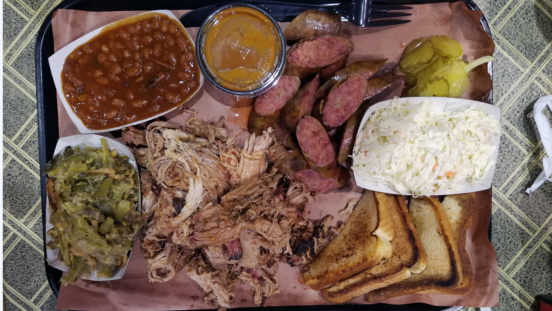 The Smoke Pit Concord, NC – The Sausage, and some desserts

Well, I convinced my wife that we should drive up to Concord to visit The Smoke Pit. That was a week ago, I hate there is such a delay in the review. I’ll just jump right in…

On this visit, I made the decision to get a two-meat deal and share with my wife; she wanted pulled pork and I wanted to try the sausage. I couldn’t load up on meats like I sometimes do; trying to control my weight and get it down more. But because they give you SO MUCH MEAT, I was able to get some pulled pork.

Let’s get those sides out of the way first…

Good stuff right here if you like Green Bean casserole. We enjoyed and would order it again. I’m hoping you know what a Green Bean Casserole is. Green Beans, French fried onions, maybe some pepper, cream of mushroom soup, some people put cheese – No cheese here -. Thrown in the oven. I don’t one myself, but my wife does.

Verdict: This is one great side item here

Why white slaw? Because my wife likes it. I like to take white slaw and mix the BBQ sauce in, if it’s vinegar based. It’s a good white slaw.

Verdict: If you like white slaw, you’ll not be disappointed.

I got them again this time because I liked them the last time. They are very good. I do add a little extra pulled pork to them though.

Verdict: Great, I may get them every time.

The meats are up next, the main reason we came… well sort of.

I’ve already review this. But I’ll add, my wife really like it too. Agreed it might be the best she’s had. This is right up there with the best in North Carolina Period. And I really like their Lexington Style sauce which makes the pork even better. As I said before, juicy meat; great hit of smoke – not too much -. Get a little bit of that outside bark as well. Love it.

Verdict: some of the best pulled pork you’ll get anywhere.

One of the reasons I wanted to come back so quickly. On my first my visit I saw some had gotten this and it looked great. Well, I’m here to say that it is great. Very juicy as you should be able to tell from the picture. I really like smoked sausage, one of my favorite meats. And this is a very good one. I’ve got to get back to City Barbecue and The Que Shack and compare theirs again.

They provide a mustard Sauce for you to dip the sausage in, which is good. But I also found their other sauces to be just as good with it. So… go with what you like here.

Verdict: If you like sausage, then come here and get some!

The desserts are up next, I always get Banana Pudding when I can. I was anxious to try theirs since I didn’t notice it was available before. But all good barbecue places have banana pudding. The wife again gets Peach Cobbler.

So, they do have a banana pudding! It’s HUGE! Far too much for a single person to eat. And it looked good before digging in. The pudding was very runny. I was not pleased with the pudding at all. Nilla Waffers, where are the Nilla Waffers??? I had something crumbled up on top; so small of a quantity that it was hard to tell if they were Nilla Waffers or not, Nothing down in the pudding. The banana’s were also over-ripened. You can see that from the side view actually.

No I wasn’t happy with the banana pudding. No award winning stuff here.

Verdict: I’ll give the pudding one more try just in case I happen to get an out of the norm not so good pudding.

Good, nothing extra ordinary about it. Still not the style that my wife likes.  He likes that dough to be a bit crispier. One of the reasons I don’t get cobblers too often is because, the dough isn’t crispy very often like a pie can be. But it was good, had a decent amount of peach in it.

Verdict: Hard to say since I’m not a cobbler guy. It’s good and, if I were getting a desert here I’d get he cobbler over the banana pudding.