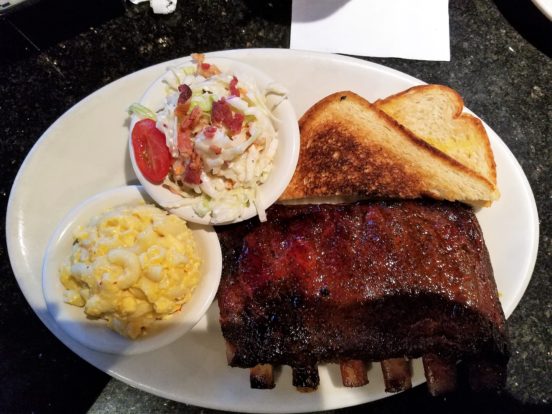 On Wednesday I was in Dallas, NC on business.  When it was time for Lunch I decided to try some BBQ that I’ve not had before. So, I did a quick search and found Ray’s with some good reviews; I decided to make the short trip to their location.

OK, not many people here, maybe it’s the location. I did see a smoker out front. At least that is a positive sign.

Once inside, the place reminded me more of a bar than a Barbecue house. No problem, I found a place to sit down and waited on the waitress. Looking over the menu, Barbecue didn’t pop out at me. OK they serve multiple things. Finally, I decided on a Barbecue Sandwich, I needed to get back to the job. One thing missing from the menu, banana pudding.

I got stuck on the slaw option for just a second and the waitress wanted to explain what Barbecue Slaw is. The positive, she gave me a little of both their white slaw and barbecue slaw on the side.

After a longer than expected wait, the food arrived.

The highlight of my sandwich was the bun, I liked the bun and how it was toasted. The pork is pulled, not chopped; you can see that in the picture. However, it was a little on the dry side. Also, it didn’t have that hit of smoke that I like. The bark didn’t give me that extra ump that some can give.

I decided to experiment a bit with the sauce and the slaws. The sauce looked like a traditional Piedmont style sauce. I took a sip to see. First thing I thought was that I as sipping alcohol. I don’t know if this was intentional or not. I poured a little on the meat, really didn’t change things. Put some in the white slaw since I like to mix the vinegar sauce with White slaw; still wasn’t my thing. Finally but that slaw on part of the sandwich. Still didn’t find the right combination.

Their Barbecue slaw is as I stated a Mustard Barbecue Sauce so… I tried that slaw on the sandwich. That was a bit better.

Understand that I am looking for over the top experiences when it comes to BBQ. On this day, this was not over the top. It was good, but my guess is that it must be better based on all the good reviews.