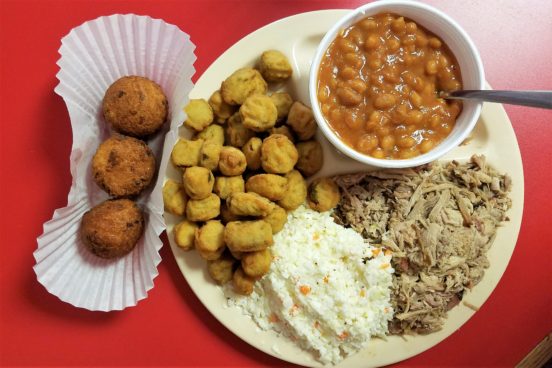 Last week I made a trip to Detroit for business. I had stop overs going up and back in Charleston, WV. I ate BBQ in Charleston, WV and Detroit. I was ready for good North Carolina Que. I wanted something on my drive AND something new. I had heard about Randy’s but never made the trip. So, I plugged it into the Maps and headed out of Charleston, destination late lunch in Troutman.

Randy’s is located at a street corner on Main Street. Parking for me was on the side street beside the restaurant. I arrived shortly after 2PM, so I didn’t have to fight any lunch crowds. There were however a few people sitting at the counter and two other people in a booth. This is a place that you could get a great breakfast I bet! I did note that they serve breakfast.

I sat at a booth and looked the menu over; I decided on a Bar-B-Que plate. I substituted the fries with fried okra. And, I noted they have banana pudding. My expectation of nothing less than good were set.

I think I remember her asking me if I wanted a red or white slaw. I like to get white slaw and add the sauce they have at the table if it’s a vinegar based sauce – it was -. It’s rare a slaw is over the top and this slaw wasn’t, but it was a good solid white slaw. Slaw is typically either good or bad. I like more mayo in my white slaw, but I guess got to be healthy, right?

A friend on Facebook saw my picture of the meal and commented that she’d prefer the Okra to have been frozen. Yeah, you can tell that kind of stuff from the picture. All the pieces of Okra looked the same, with the same amount of heavy breading on them. Regardless, it was good stuff. Someone can correct me if it wasn’t frozen.

They are good. I like hushpuppies and these are up there. They aren’t stuffed with anything, apparently some people think you need to put cheese or something else in a hushpuppy; based on a comment I saw on my twitter feed last week. Nice and crips on the outside, and not doughy on the inside. However, please note that I don’t eat the entire hushpuppy. I cut back by eating the outside. Sorry, but I love the outside and figure I cut a few calories. I did eat one whole one just to get the full impact.

These are very good! Yeah, I like baked beans. I also like to have some meat in mine! I took some of the pork and added it. This is good stuff. Yes I’ve had better, but not in Troutman.  When I return here I’ll get them again. 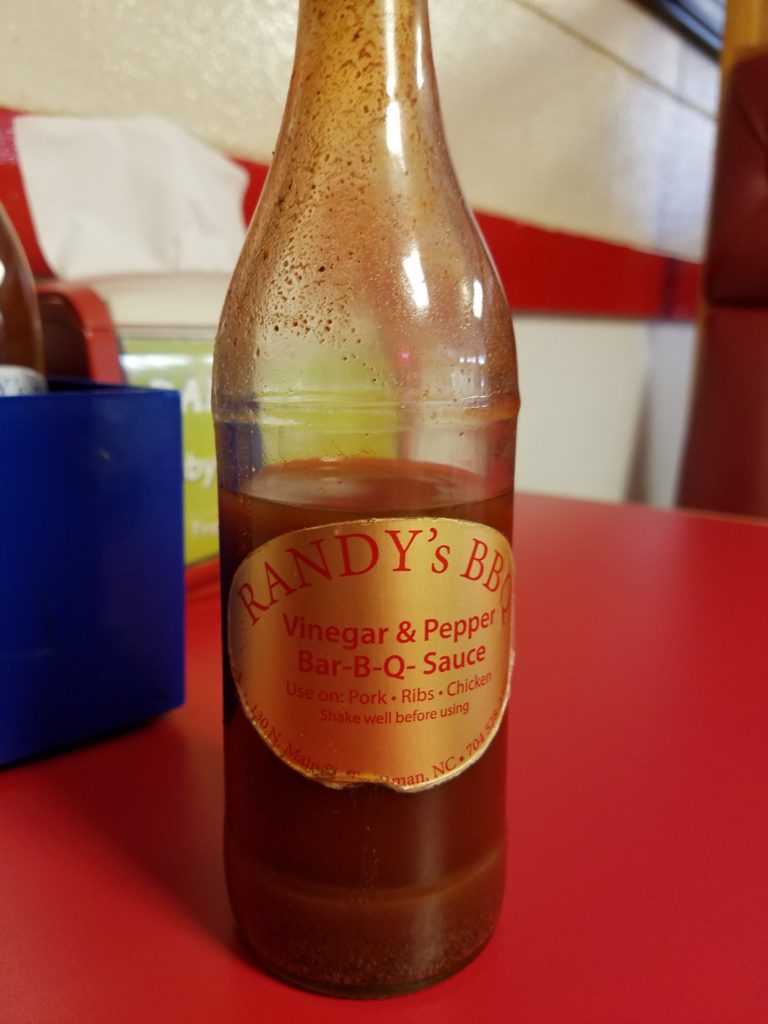 Not only am I back in North Carolina, gee I could swear I’m in Eastern, NC. I noted a Piedmont Looking sauce, but the pork came out chopped and had some vinegar already in it. This is an Eastern, NC thing for sure. So, I tried some of the meat before adding the nice looking red vinegar sauce on the table. Yes, as it hit my mouth I enjoyed it. The meat was very tender, had a nice hit of smoke and it had a little tang from the vinegar. I put some of the red sauce on, which was red from pepper in it, I like it.

Verdict: If you live near Troutman, you need to check this place out. I’m certain I’ll be back again; I hate I’ve missed out on such a great place!