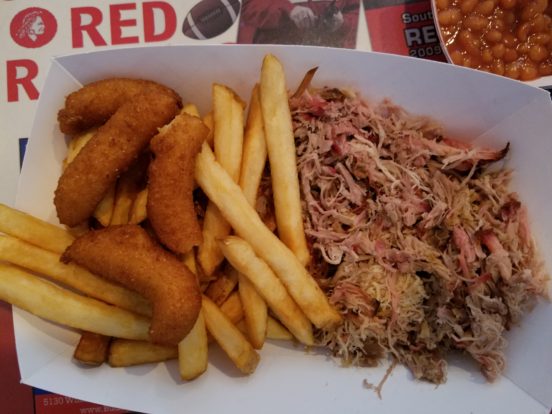 One of my favorites in Lowell, NC. OK, it’s a favorite in Gaston County as well. If it’s lunch time and I’m nearby, then I’ll probably stop in here. My favorite here is their banana pudding. I like their pork and I’m a huge fan of their smoked turkey.

If you arrive here at or close to lunch time, you’ll find yourself standing in a line. It’s not a large restaurant, seating is limited. Also, you need to bring cash. Also, be prepared to be hit in the face with South Point High School stuff along with UNC!

This trip I had pork, baked beans, slaw, fries and hush puppies; the standard offering. I finished with banana pudding, you didn’t think I’d leave that off, did you?

The Pulled and Chopped Pork

This is good stuff, is it the best I’ve had? No, but it’s good stuff. Their process leaves the meat a little drier than I prefer; but it comes to you without sauce. This allows you add sauce as you like. Their sauce helps compliment the meat, and it doesn’t kill the nice smoke hit the meat took in. They do have a nice vinegar sauce and there is a thicker Eastern NC style sweet sauce. My preference is to not put the thick stuff on pulled pork.

I like their baked beans. However, I also like to take some of the pork and put it into the beans. I think it makes them better.

The slaw is nothing special. You’ll note from the picture that it’s swimming in BBQ Sauce, I like to do that with any white slaw. I prefer doing that to getting the Barbecue Slaw.

Really nothing special. So un-special that I don’t waste the calories on them. They’re not bad or horrible, just not special

Piece de resistance … yeah that’s right, this is good stuff. One of the better banana pudding’s you’ll find. No good barbecue place should be without this dessert! And it’s great when I find a really good banana pudding. This here folks is a really good one.