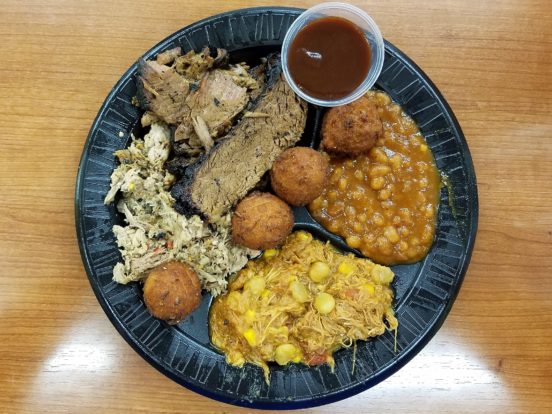 Again, I’m trying to find new places in the Durham area. So more searching kept bring up how great Johnson Family Barbecue is. After my experience the previous night at Bullocks, I just didn’t know. But I decided to give it ago based on the written review I found. It promised to at least be a BBQ restaurant.

As I arrived at the location I wasn’t disappointed; there was smoke, and lots of it! As I got out of the car, the smell hit me! Awesome I thought as I made the walk up and inside.

It’s a small place, with limited seating. I went up to the counter to place my order. They distract you by having the menu played on a monitor but then it changes to something else. I made a comment and was told that was why there were menus placed on the counter, in a not so “friendly” tone. Oh well, I’m an idiot I guess. She then told me that it was brisket day. I think she said they make brisket every other day, and Wednesday was a brisket day. I asked if they had banana pudding; she said not today but they had cakes. I passed on desert.

I placed my order:

I paid, left her a 20% tip even though she made me feel like an idiot; and filled my cup with drink, sat down and waited. I people watched as a few more came in and ordered; then my plate was set before me. She informed me that they Smokey sweet sauce was for the brisket and the vinegar sauce for the pork.

Everything looked good and there was a bonus, hush puppies! I love hush puppies and these were very good. What to eat first? I tasted the sides first.

The Brunswick stew was good and loaded with pork, the baked beans were better. And the beans got “more-better” after I put a little brisket and pork in them.

Then I put a little of the sauce on it, not much. I really liked that combination. Their sauce works well with the brisket.

Verdict: This is one of the better briskets you’ll find in North Carolina. Yes, if it’s brisket day and I’m close here in the future, I’ll stop in and get some.

I liked the Pork, like the vinegar sauce on it. It had a similar hit of smoke to it and there was a bit of bark as well. Overall, I liked it.  The vinegar sauce needed a little something more; maybe a better vinegar.