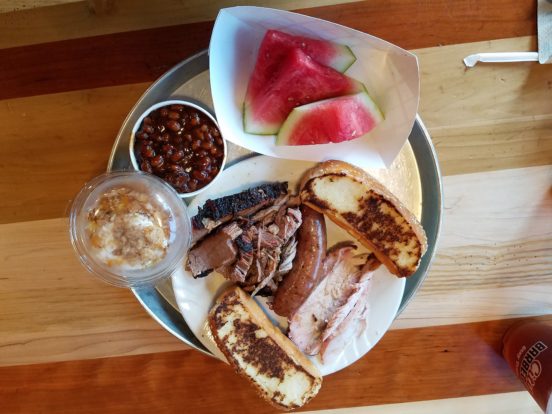 I’ve visited City many times, this location probably a dozen times; and another location in Garner, NC a few times which was my first experience. They’re a chain and yes, I know that you find better BBQ in the smaller places. But sometimes those smaller places are convenient, but you still want some BBQ. What I’ve found with City Barbeque is that it is a very good chain of restaurants. Management will matter if you go to a different location, and who is running the “pit”. Ok, it’s not a pit. But you know what I mean.

Because City has so many different offerings of meat, and I like them all. You’ll see additional reviews as I get around to eating there AND trying a different meat. I may also write if I attend a different location.

On this visit my wife was with me; we decided to share the City Sampler. I’m really trying hard to cut back on my quantity of input of calories; while maintain a certain level of quality input of taste! The Sampler comes with Brisket, Pulled Pork, Sausage and Turkey. The sides we selected was watermelon and Baked Beans with Brisket with Texas Toast as the side.

One of the reasons we made this visit, I wanted to give City’s Banana Pudding ONE more chance. After all Paula Deen cannot be wrong, can she? Read on for that answer.

Watermellon – My wife wanted the watermelon. It was good, what are you going to say. This is probably as hit or miss as anything. All they do is buy the melons and cut them. They can try to select good melons obviously.

Baked Beans with Brisket – Look at them in that picture. Don’t they look good? Well they are, they are very good. My favorite side at City Barbeque. And it doesn’t hurt if you drop a little meat from your plate into it. I’ve tried other sides, this is my favorite by far. One of the better baked beans you’ll get anywhere. No not the best, but pretty darn good stuff right here.

The Brisket – Let’s get this one out of the way first.  I’ve either ordered or had some of someone elses brisket from here almost every visit. There is variance in the final product you get. Sometimes it’s excellent, sometimes it’s just very good. This visit I’d say it was only very good; it was just a little drier than what I like to give top bill. Here we had good smoke hit and a decent bark on it. The cut was a little leaner than I’d ask for; give me a little of that fat in there.

I’ve had some excellent brisket over the past month, so it’s making it harder for others to step up to that level. But understand, I am only talking about a couple of places right now having better brisket, and none of them are in Charlotte. They do have the best brisket I’ve found in Charlotte.

The Pulled Pork – Pulled Pork is one of my favorites. Growing up in North Carolina, we’ve had pork all our lives. Brisket is relatively new for our area.  I like City’s Pulled Pork. It’s moist, good smoke and they have a very nice North Carolina Piedmont/Lexington Style Sauce. It does a great job complementing the Barbeque. They also have a pretty good Eastern North Carolina style sauce as well. City may not be from North Carolina, but they’ve adapted nicely I’d say.

Verdict: This is excellent Pulled Pork

The Sausage: This is something that is hard to find. It’s something you’ll not find often in the “local” barbeque places that have one location. You’ll also find people try to offer it and they just don’t get it right. OK, City Barbeque does sausage right! No, not the best. I am hopeful to have a review next week of my absolute favorite. But this is one of the better that you’ll find in Charlotte people! If you’ve not had a good Texas Smoked Sausage, then you should give this a try. These are juicy, and have a very good flavor along with a hint of smoke.

A tip, I like putting that North Carolina Piedmont/Lexington Style Sauce on it after I cut them up into slices. You may prefer the other thicker sauces, they are good too with the sausage.

Verdict: This is actually my favorite meat at City Barbeque.

The Turkey: Oh man, this was the first time I’ve had their turkey. My picture may not properly represent the moisture that has been retained in the meat. It had a nice light smoke hit. I played around with different sauces trying to find the right one that paired with it. They were all good.

Verdict: City has something for everyone; if you don’t like beef or pork… well there you go. A very good turkey offering!

The Banana Pudding: I’ve tried their banana pudding several times and… During one of my last visits a sign was up about how Paula Deen had named this to a list of “10 to try”. I’ve tried to find this list but I cannot. I’m pretty good using search engines too by the way; so it must only be available to subscribers. Paula, if you think this is a must try banana pudding… I’m sitting here shaking my head. You had something different than what I’ve been getting.

I’ve got to say this, I don’t get it; and no, it’s not the caramel that throws me off. Yes, that is different and not traditional Banana Pudding. My problem doesn’t start there, it starts with the pudding itself. It’s not that special. It isn’t horrible, it’s an OK dessert. But there is nothing about this banana pudding that puts it over the top. And those that know me, know I’m a banana pudding freak. I’m also a banana pudding snob and I admit it. You can deviate from the norm, but your deviation best be spectacular.

They put the caramel on it, they also go for a caramelized crumbled, I guess nilla wafer maybe? But really, the pudding just doesn’t get it done for me. And how about putting bananas in this thing?

I really wish they had a banana pudding here that I could say that I like and I’ll get every time. But until I hear there has been a change to how this pudding is made, it’s not for me. You might like it so you should at least try it one time.

Verdict: No more for me until there is change. I’ll save the calories for something else!