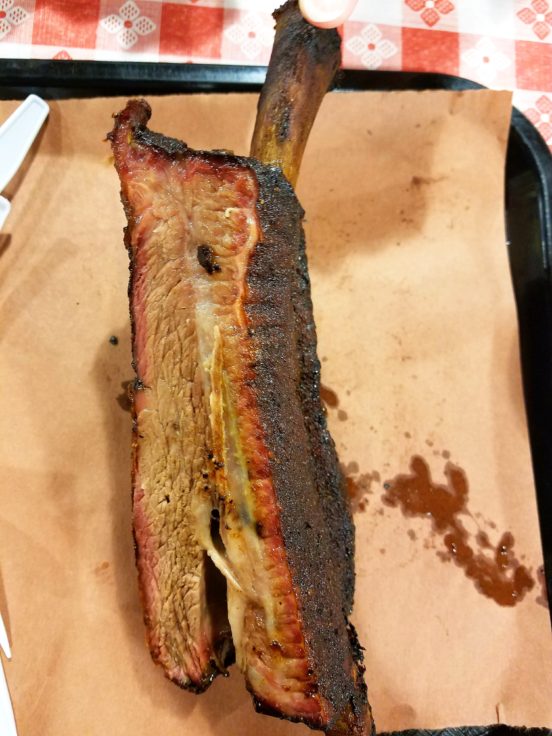 When people talk about Texas Style and North Carolina Style; folks it really isn’t about which is better. The main difference is about the meats that are used within that locations. If you need an understanding of the different styles of Barbecue, go to YouTube and search for the “The BBQ Song”.

And gosh darn it, don’t get hung on any style! Trust me, I’ve had pork in Texas and North Carolina – and a lot of other states – if they know barbecue, it’ll be good; if they aren’t, it won’t. Texas or North Carolina doesn’t mean a hill of beans in that regard.

Another point about “style” could be the woods they use, for example in Texas you’ll find people using mesquite, in the Carolinas you’ll get Hickory and maybe some Fruit woods mixed in. Trust me, it’s ALL good.

Then you’ll get the use of different sauces with the meat. In my opinion, some meats handle different styles of sauces better than others. But there are even variants to that. For example, on pulled pork I like to have a vinegar based sauce and prefer anything from Eastern NC style to Lexington, NC style. But give me ribs and I prefer either a dry rub only OR a sticky, smoky, sweet and or hot spiced sauce or a combination of all of those.

But enough about that… I’m back at Big Tiny’s BBQ for a reason, Saturday’s are beef rib days. Beef Ribs, I’ve only had a few of these in my life, and all from Texas. Cannot be more than half a dozen prior to this visit to Big Tiny’s BBQ; so I am by no means an expert on the way they should be. I just know what I like when it hits my taste buds. Mostly the beef BBQ I’ve had has been mixed results IN Texas. Just because the place is in Texas, or the pit master comes from Texas doesn’t guarantee that it’ll be good.

$18 dollars for this beauty, loaded with more meat than I should eat. How was it? It was right there with the best beef rib I’ve I had in Fort Worth at Robinsons BBQ. This rib was hit with smoke nicely, it was very tender and retained good moisture in the meat. It was all around awesome. You’ll not find a steak that is this good at this price, or even at a slightly higher price. Heck fire man, smoke some rib eyes!

Big Tiny’s BBQ is winning me over as one of the top Barbecue places I’ve eaten it. And I’ve easily eaten at over HUDREDs of different places in my life. The guestimate number is staggering to a point that you wouldn’t believe it.

So, what is my verdict? Drive to Mooresville on a Saturday and get yourself a beef rib, it’s a winner.

Because it’s a side worth mentioning and showing a picture of! My wife and I really enjoyed it. Very, tasty and … one of the better sweet potato casseroles I’ve had. Becky says that she wants to go back to get some more of it.

This is also a side worth not only mentioning, but showing a picture of. It was very good as well. Big Tiny’s is hitting on the sides as well folks!

The Verdict: If you like Green bean casserole, you’ll love this!

For Dessert I had Banana Pudding again, you’ve hopefully already read about it. If not, get it.

My wife had Peach Cobbler! The problem was, her serving didn’t have enough peaches in it; but it did have a lot of juice in the breading;. Also, she doesn’t like the breaded kind of cobbler, preferring the crumbled crunchy kind.

The Verdict: We have to go by what my wife said here: not her thing. 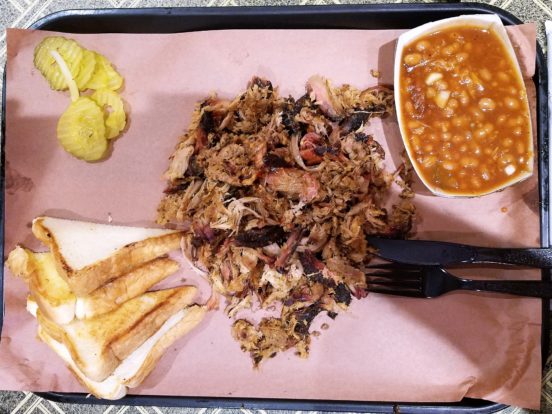 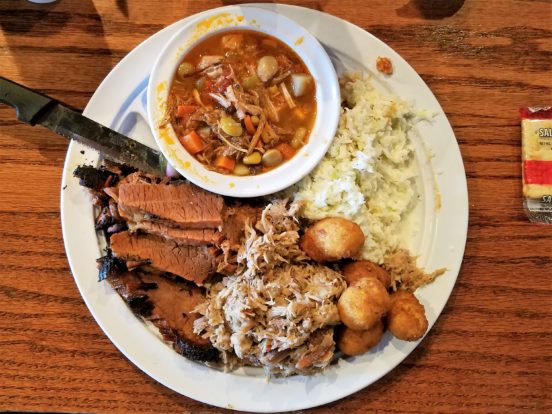 I hit another BBQ place that I had not visited before in the Raleigh Durham Area, this time it was Hillsborough BBQ Company. This time met up with a friend, Jim West. This is his “neck of the woods” and his suggestion. Google Maps did some stupid routing and cost me at least 10-minutes on my trip from Durham over to Hillsborough. I wanted to throw that in.

One of the things that I’d like to identify is the location of the best brisket in North Carolina. Brisket ain’t pork you say, I know; keep in mind, cows and brisket isn’t reserved to Texas either. I may have already found the best, but the quest continued this evening.

So this time around I ordered the following:

The white slaw is, white slaw, nothing special here. I order white slaw and then add whatever vinegar based BBQ sauce they have. They have what they call a Midwest Red – more on it later -, that really didn’t change much. Their Eastern NC style sauce was OK like this. Yes, I know you can order a Barbecue Slaw, theirs is a Lexington style.

Did you notice how I gave it its own heading here? That’s because it can stand on its own, meaning it is very good. Those that do not know what Brunswick Stew is I’ll tell you. It’s something that you’ll find in many BBQ restaurants in the south. The best way to describe it is that it is a very thick vegetable soup that is typically loaded with some smoked meat, for instance pulled pork. This Brunswick stew is very good, I enjoyed it.

Verdict: Next time I’ll get a side other than White Slaw, I’ll get the Brunswick stew again!

Now let’s get to the meats

Barbecue is all about low and slow and getting the Smokey wood flavor into the meat. With brisket, you need to the heat low and to get that smoke into it, but you also want to render some of the fat into the meat. Also, you want to leave some fat. So that temperature at some point goes up from low. How long and how much long will determine the final quality of the product. It’s a hard meat to smoke, this I know. Many times, you get brisket and it is overcooked, so the meat will be drier and fall apart.

This brisket was good. It had a nice hit of smoke and good flavor. I do think that it might have been left just a little too long at a higher temp. Still, it is better than most brisket you’ll find. The Midwestern sauce, was a nice touch on it as well. Was it the best I’ve had in North Carolina? No.

Verdict: Yes, if you like brisket then you’ll want to get this.

The pulled and chopped pork was good. The Eastern NC sauce worked the best on it. This was not drive out of your way good, but definitely a good meal if you like smoked pork.

Verdict: Good, not over the top great.

They had two sauces, a Midwestern Sauce which worked well on the brisket. I’m not certain what it is Midwestern to, North Carolina? It was kind of a like a Lexington Sauce but thicker, heavier on the ketchup, there seemed to be some vinegar in it but no twang from it. The vinegar sauce is an Eastern NC style sauce.

Oh my. This stuff was good, very good. AND, they make the pudding which is an egg custard style pudding. They crumble the nilla wafers up into the pudding.

Afterwards, Jim and I walked in the River walk along the Eno River.